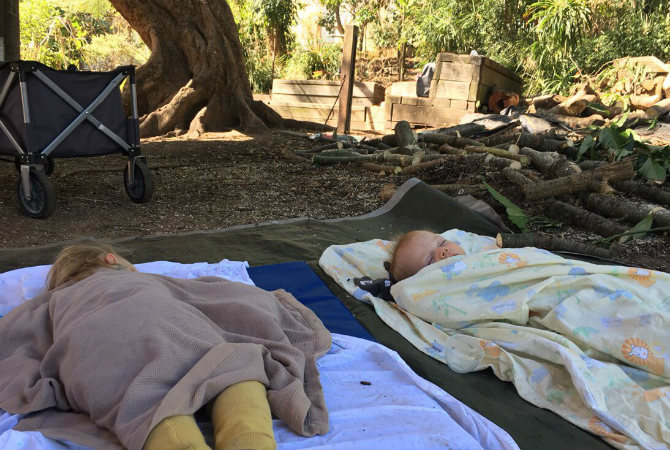 In our decision to stretch our days out from a short half-day to a full 6 hour day, we had to consider the logistics of how exactly we would manage “rest time”. Where would they sleep? On what? And what would sleeping outside mean for their opportunity to fully rest?

We began to find an overwhelming amount of information that implied resting outdoors might not only be a satisfactory way for children to sleep, but that it might just be better for them than sleeping indoors. Centre’s all over Australia are following the examples set by many European countries for years where they have found that allowing children to sleep outdoors in all weather improves their physical health – including brain development, bone and muscular development, decreases illnesses and social and cognitive development. (Essential Baby, 2017, Little Learners, 2017, Walmsley, 2017).

Though there seems to be no concrete evidence pointing one way or another – yet – as to whether this does have as many benefits as are claimed, what we do know is that it certainly isn’t doing the children any harm. We have found that our children are having deep, long rests when they sleep outside and that some children who generally never sleep indoors will sleep long and hard outside.

And really, who can blame them? Falling asleep to the sounds of birds singing and the wind rustling through the leaves, leaving traces of cool breeze on their faces, sounds like the ideal way to fall asleep to me!